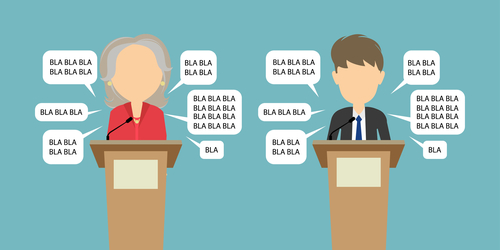 There are a lot of things to take away from last night’s first debate between Hillary Clinton and Donald Trump, but there will be plenty of talking heads and social media debates today to cover those including your Aunt Mildred who will somehow tie your lack of political common sense to your decision to attend college.

But if you find yourself back at work today, concerned mainly with leading your organization’s growth and marketing efforts, still hungover from last night’s political theater of the absurd that is the race for perhaps the most powerful position in the world, I’m going to give you the one takeaway from last night’s debate that will change the course of your marketing efforts for the next four years and beyond. You ready?

“They are waiting for IT.”

The numbers aren’t in yet, but CNN estimated that up to 100 million viewers would tune into the first presidential debate of 2016. That would far surpass the 67.2 million that tuned into the first Obama-Romney debate in 2012 and almost double the paltry 52.4 million that watched the first debate between Obama and McCain in 2008.

Why the huge surge? Are there 40 to 50 million more undecided voters in this polarized political landscape?

While I will leave that answer to more qualified political analysts, I can tell you what I saw by doing a little market research on social media before, during, and after the presidential debate. People are looking for something they can believe in and support, and neither of the candidates are doing a good job of checking off that basic but often eluding check box–the IT factor.

Neither presidential candidate inspires allegiance through their personal brand and messaging.

Reactions to the First Debate of the 2016 Presidental Election

Trump surprised me in the beginning of the debate by sticking to his talking points, and while he was blatantly disregarding the rules and decorum of national political debate, I thought he was tactically brilliant. His wit and quips landed well, they were well timed, and when he did speak at length, his messaging was clear, concise, and reinforced the things his voter base cared about. In my opinion, for the first time in the election, he looked semi-presidential. He didn’t bite when baited by Clinton. He controlled the conversation, and he played his aggressive nature perfectly–appearing confident but not a bully. He repeatedly addressed Clinton’s email scandal, but he never went too far, preferring to let the facts stand and giving Clinton rope to hang herself.

But as the debate continued, and the moderator gained at least partial control of the event, you could see the momentum fade from Trump’s side of the stage. Clinton is a more experienced debater. Her points and policies were more thought out. And in a controlled environment, her own barbs landed sharply. When pushed, Trump lost his composure and said things I’m sure he, or his campaign, wishes he could take back, specifically his role in the birther controversy and his past comments about women. But even when she gained momentum, I don’t think she elicited much more than a sturdy, “meh”, in relation to past democratic candidates at this stage of the game, and she surely didn’t sway many votes.

That’s what we were left with, two candidates that neither side seems terribly excited about. They certainly don’t match the passion that Obama and George W. Bush evoked from their political camps. Neither side have the evangelists you would expect one month out from the general election.

Neither of these candidates are “IT”.

They’ll get votes, but many of those votes will be because of the shortcomings of their opponent rather than the strength of their own message and brand.

That’s hard to get excited about.

Being the lesser of two evils is not the best path to leadership.

The frustrating thing for these candidates should be that they seem incapable of getting people fully behind their candidacy because, as Americans, we want to be excited about a candidate. It’s part of our cultural fabric.

That’s the lesson for us in business and marketing.

You have an audience out there waiting. That audience is not everyone in the market.  That may sound surprising, but building that marketing strategy would be like launching a political campaign where you tried to attract every voter. If you’re trying to do this, you’re setting yourself up for failure, particularly in a market with far lower barriers to entry and a new business model predicated on niching down. If you’re trying to go after everyone, these small companies are going to slowly snipe segments of your customers away by meeting their particular needs better than you can because you’re busy trying to make everyone happy.
Who are you?

What makes you fascinating?

What differentiates you from everyone else in your market or industry?

Maybe you have superior quality. Maybe your customer service is unmatched. Maybe your story is captivating. Maybe you’ve been around the longest.

There are an almost unlimited amount of ways that you can discover and build your “IT” factor, but it starts with knowing who you are, who you are best suited to serve, and then making sure you give them a reason to believe you’re the best company to solve their problems.

You want to speak to your evangelists, and serve them first. Build a brand they can get excited about.

When I was starting my first entrepreneurial effort, I sought the counsel of a pastor friend of mine who was much older than me. As I began to talk to him about why I was starting the endeavor, I began telling him all the ways that I felt the current landscape was failing and about the pushback I was receiving from those invested in that establishment, he stopped me mid-sentence, and I’ll never forget his words.

“If you continue down this road, you will fail. You’re telling how they have failed, but you haven’t told me how you will succeed. Spend your energy on your vision. They are none of your concern.”

These words have served me well as I’ve advised dozens of clients on their brand and marketing strategies, and if one of the campaign strategists for Trump or Clinton is out there, please, on behalf of a waiting nation, please feel free to pass along the advice.

We’re all waiting, and we all want to believe in something or someone.

Leadership, But Not Traditionally Speaking

Are You Actually Too Busy? A Fresh Take on Time Management